Produced By: Whistler In The Dark

Performed at: Rehearsal Hall A at the Boston Center for the Arts

Mary's Wedding is the story of a young bride-to-be who dreams one last time of the love she lost to war. Mary and Charlie find each other seeking shelter in a barn from a summer thunderstorm, and a tentative love blossoms. But the year is 1914 and Canada is about to enter The Great War and send Charlie oceans away from his new love.  As Mary remembers the story the old barn morphs and changes, haybails become sandbags, thunder turns to morter shells and the boundries that seperate the home front from the battlefield begin to blur. Mary's Wedding is an exhilarating tale of first love, war, remembrance, and the sacrifice of soldiers made at home and on the battlefield.  The scenes transition smoothly blending times and places, characters, memories

Inherit the Wind is a fictionalized account of the 1925 Scopes "Monkey" Trial, which resulted in John T Scope's conviction for teaching Charles Darwin's theory of evolution to a high school science class, contrary to a Tenassee state lat that prohibited the teaching of evolution.  The story follows the trial of Bertrum Cates, a callow Darwinian who represents the real life teach John T Scopes. For the prosecution we have Matthew Harrison Brady, a thrice defeated presidential candidate and a hectoring fundamentalist. Opposing him is Henry Drummond, a wily Chicagoan who believes in the right to individual thought.  The play explores the conflict between fundamentalism and individual thought, as well as the power of the mob, and the importance of the role individuals have in shaping society.

Lend Me A Tenor

Produced By: The Nextdoor Theater Company

Performed at: The Nextdoor Theater Center for the Arts

Lend Me a Tenor is a the comedic story of Max, gopher extrodinair for the Chicago Opera Company, who finds himself in quite the pickle the night of a huge performance.  Italian opera singer Tito Mirelli is to sing in their companies production of Othello when he gets in a fight with his wife and accidently overdoses on sleeping pills and alcohol.  Assuming Tito is dead Max is ordered to impersonate him in the performance that evening.  When it turns out Tito is not dead after all a farsical mess of slamming doors and hillarity ensues.  The action of the play takes place over the course of a late afternoon into night, as such I employed subtle shifting in tone and quality of light to suggest the passage of time.  We also wanted to create the sense that, when Tito is teaching Max to sing with confodance, the whole world melts away and all he hears is the orchestra.  At the same time we never wanted the audience to forget that important action was going on even where main action was not.  As such I used tight control of certian locations to draw attention to important moments happening away from the main action of the show.

Once On This Island

Framed as a story being told to a young girl on a dark and stormy night, Once On This Island is the story of a poor village girl, Ti' Moune, who falls in love with a dying rich boy, Daniel. She gives her soul to Papa Ge, the sly demon of death, in exchange for his life and journeys to the city, guided by the gods, to be with her new found love.  Once there, however, both discover that she will never be accepted by his society. This production focused on the ideas of life being a journey that compells you onward, and how storytelling can preserve those journeys across generations.  I set out to create vastly different locations on the island to show the true expanse of her journey, and how far she had come culterally from her own home.  I also wanted to show how the influence of the gods on the island compels her forward in her journey from one small girl, tossed by sea, to a caracter of myth and legend.  In order to acomplish these things, I used tribal patterns and colors to represent each god and show how they influence the island, their auras spreading over it as they bend and break the world to their will.  I infused these tribal patterns associated with the gods into the amber toned world of the island villagers, in this way I was able to show her journey away from her home not only via location change but in the shifting from the warm tones and tribal patterns of her village, to the crisp light blues and light lavender tones of the city and the once royal descendants of the french.

Through modern dance, set to contemporary rock ballads,Moontides in 23,149 Parts tells the story of a woman who escapes her mundane life by falling into a dream.  The story is framed by The Professor, who is reading a book called Moontides in 23,149 Parts, as the professor begins reading we shift into the world of the dream, which takes the woman down into an underwater world, a place which mimics her own mind.  Down in these dark waters the woman rediscovers memories of a lost love who battled with addiction, and the two reconect in her mind as they each struggle, trapped, in their circular unsatisfying lives.  The woman is able to save her love from his cycle of addiction and in doing so reinvigorates her own desire to actively change her life.  In the end we are left with the notion that within every human being there lies infinate capacity for change.  The lighting for played a pivital role in taking the audience on a journey; from a starkly lit classroom down to the jewled tones of the sea, where thoughts glow like beacons of light carried by thought birds, and finally into the womans waking life where a sunrise encourages a new day and a fresh oportunity.

Performed at:  The Stoneham Theater

Cats is the magical tale of the jellicle cats and their annual ball.  The cats creep into the dark deserted alley where it comes to life with song and dance.   Each cat sings a song telling their tale and finnaly one is selected to have the honor of going to heaven and be reborn.  As if triggered by motion sensors, as the cats arive and begin their ball, the lights shift and the alley becomes a place of shadowy movements amd magical song.  As the show goes on and the magical storytelling continues the lights ebb and flow with the mood showing how each cats unique personality has an effect on the world arround it.  Finnaly when the selection is made Grizabella ascends toward the bright lights of heaven to earn he place amoungst the honored, and with her passing the cats exit, and the alley reverts back to a mundane, dark, deserted alley, until the next jellicle ball. 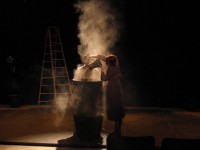 The seccond show in the Movment Workshop Group's elemental series, Dust to Dust is a movement peice set in the 1930's inspired by the element of Earth.  The peice explores the unequal distribution of wealth in America, as it relates to healthcare, hope, and every persons individual sense of purpose and validity in our culture.  Lighting highlighted the vastly different cultures of rich and poor, contrasting the earthy tones of the working class with the sparkling mystique of a wealthy life.  Lighting very strongly, along with costumes, served to remind the audience of the peices roots in earth as well as tie the peices modern contexts to the 1930's.

A Raisin In the Sun

A Raisin in the Sun is the tale of the Youngers, a poor African American family struggling to get by.   At the opening of the show they have recently lost the patriarch of the family and are expecting a check for his life insurance policy.  The various members of the younger family each have different ideas of how to spend the money, and the action of the show revolves arround this check.  The play explores the relationship between following your dreams, and the obligations of family, and how the two can coexist and in fact propel eachother forward.  Eventually the Matriarch of the family decides that a bright new home would bring joy to all of their lives and she purchases such a home in a white neighborhood, much to the dismay of the neighborhood association who tries to buy them out of the neighborhood.  But the Youngers learn that staying true to your family can give you the strength to reach for your dreams.  The lighting in this production served to create this tight closed space where the audience forgets there is a world outside the Youngers' apartment.  Cool tones and mottled breakups served to make the home feel stifling and dirty, the only hope for sunlight coming from a small window above the sink.  The mood of the apartment served to reinforce the feelings of bondage the characters felt towards their family obligations.  This environment also reinforces Mama's ideas that a brighter home influences the people who live there; if their home doesnt feel like a prison, the Youngers wont feel like prisoners.